There are games that can define a generation, a perfect mixture of mechanics, narrative, character arcs and innovation. Call of Duty: Ghosts, in my eyes at least, is not such a game.

I may have shown my hand a bit early in to this review, but I’m going to be perfectly honest with you. The single player campaign for Ghosts, is just bad. Functional? Maybe, if you can overlook the so called “innovation” in the form of the “Lean” function , which as been a part of the PC versions of the game since Call of Duty 2, and the “Slide” ability which looks and feels like a direct knock off from Brink. I admit the latter was quite fun, there’s something strangely fun about sliding round a corner guns blazing to reach cover, reload, and then do it all again around the next corner.

A brief run down of the story. South America, invades the USA, you are then fighting guerilla warfare in your own back yard to fight for control and bring back the war to a point where you can freely walk the streets without fear of getting your head blown off by a Mexican sniper. There may have been more to the story, but to be honest, it lost me so early on I didn’t care by the end of it. The main thing that was grinding on patience for almost the entirety of my play through (7.5 – 8 hours) was the lack of character development, you start as a muscle head, capable of taking multiple shots to the skull and shrugging them off as if it were naught but a grazed knee, and that is exactly how you finish. I learned nothing of the personal struggles of being in the military or how taking another humans’ life effects the psyche. All I really did learn, is that I much prefer animals to humans. Riley the dog, was the one saving grace that prevented me from quitting mid play through and returning to Red Dead Redemption, for another bout of whore skinning and gun slinging. Interestingly, I found him more engaging than any of the human NPCs combined, I actually found myself caring about him and wondering if Infinity Ward would play the “Lets tug on those heart strings” card and bump him off before the final battle. 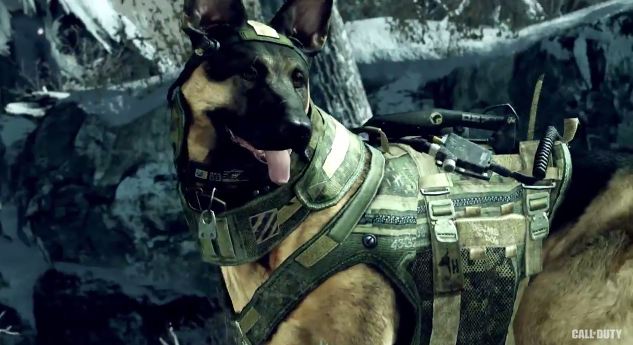 He will will melt your heart, then rip it out!

A part of me really wanted them to do this, it would have made me actually care about killing the main bad guy. Getting revenge for my canine companion would have been the perfect bitter sweet ending. I would have preferred this, to the sub standard ending that I got instead. An ending that looks,sounds and feels exactly like the ending to MW2. It was almost as if they had lifted it straight out, re skinned it and placed it back in.

Anyway, moving away from characters for a moment, would it really kill them to make some nice vibrant environments? Sure it’s a war torn version of the USA with jungle scattered in between. Brown, grey, dark yellow and dark green is just about as complex the colour palette gets in this game, is there a law that says “All environments must be as dingy and depressing as possible”? All I ask for is a map where I can actually see people moving, without having to sit so close to the screen I can see nothing else 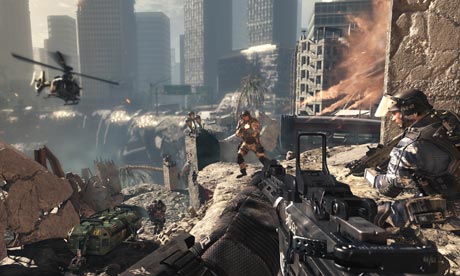 I shall wrap this review up now to save myself from nit picking. As a long time fan of the Call of Duty franchise, Ghosts has one of the weakest single player campaigns to date, a cliché story line that only conspiracy theory enthusiasts will find engaging, with a boring and uninteresting cast of characters, all apart from Riley that is. I will say this though, the sound design is amazing, hearing enemy footsteps and battle crys saved my ass more than once, but unfortunately its not enough to save it from my cynical point of view.

In conclusion: its not worth playing. it will bore, frustrate and leave you unfulfilled. If you must play it, be warned that the dislikeable characters, the “teach and throw away” game elements and the forced stealth section (note the singular) will cause you to become completely brain dead by the end.

I hope you have enjoyed this brutally honest review, please feel free to give your opinions in the comments.