With British diver Tom Daley, weightlifting sensation Zoe Smith and Greek triple jumper Voula Papachristou all landing in the front pages due to certain things posted on Twitter during this year’s Olympics, the question begs, should Olympians be risking the most important event of their lives, just to post a tweet?

The front pages of this morning’s newspapers are splashed with the latest news of Tom Daley’s Twitter antics. The 18-year old has been propelled into the spotlight, not for his sporting abilities, but for his online tiff with a 17-year old boy who goes by the name of @Rileyy_69.  The semi-anonymous troll attacked Daley just moments after he and fellow diver Pete Waterfield just missed out on bronze in the men’s synchronised diving event. ‘Rileyy 69’, a teen twitter sensation who deliberately targets others with abuse to gain popularity, sent to Daley “You let your dad down i hope you know that”, referring to Daley’s late father who passed away in 2011 after a long battle with brain cancer. Daley was quick to pick up on the message, and broadcast to his near 1 million followers “After giving it my all… you get idiots sending me this…”and reposting the comment. 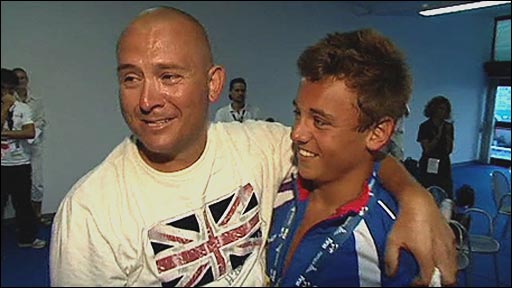 The messages went viral in a matter of moments, with the abusive user becoming the most talked about topic on the entire site, the world over. ‘Rileyy 69’s account has henceforth been suspended and it was revealed that he was arrested this morning by Dorset Police. But this is by no means an isolated incident.

Yesterday also saw Zoe Smith, 18, a breakthrough performer in the women’s weightlifting, discussing her constant persecution through twitter about the nature of her sport. After a tirade of abuse referring to her as ‘manly’ and making abusive comments, the 18-year old Olympian has retorted saying her world record-breaking performance yesterday was “Two fingers up to them!”

However it is not just Olympians that have to defend themselves against online abuse. Greek triple jumper Voula Papachristou was scandalously disqualified from the London 2012 Olympic Games   after posting on July 22 “So many Africans in Greece at least West Nile mosquitoes will eat homemade food!” She later apologised profusely, but the damage had already been done, and she was banned from The Games.

With countless young Olympians from varying countries posting on Twitter daily, is Twitter beneficial or detrimental to the progress of The Games? In the break between competing, Zoe Smith was seen sat on the floor backstage tweeting, posing the question ‘Shouldn’t she be focusing more in the competition?’ and with these great heroes of sport receiving such untold amounts of unwarranted abuse which could affect their performance, would it be entirely unjust to suggest a ban on social networking at the games?

However, it is important to consider the other side of the argument. Although Olympians have been receiving (and some handing out) abuse, there is also an absolute landslide of support from the other side. With the Daley debacle, thousands upon thousands of adoring fans came to Daley’s side tweeting messages of support and campaigning to get ‘Rileyy 69’ banned  for his messages. Also, in this current technological age, where The Olympics and sport may be quite out of touch with the younger generation, Twitter allows young Olympians and fans alike to connect on a more personal level and be provided with a first-hand perspective of the Games, through the eyes of those competing in them. Among countless others there are also Twitter accounts of Team GB and London 2012 which regularly post up-to-date information about The Games and who has won which medals, which for those who do not have access to a TV, provides an invaluable insight into The Olympics.

With both beneficial and detrimental effects on the athletes and The Games, what is your opinion? Should there be a ban on social networking at The Olympic Games, or is it essential to reach the wider audience?