On Thursday for a variety of reasons that only our electorate will know- UKIP made waves. The small party of only 21 years standing managed to top the polls in the European Parliament elections and break it’s way through in councils across the nation.  This rampant bucking of the trend in which the euro-sceptic party managed to return 24 out of our country’s 73 MEP’s seems to have put activists and party leadership amongst the “Big Three” on the back foot. A bit of perspective is needed however before we move into a paranoid state of moral panic. WHY have an otherwise largely ignored and dismissed non party managed to secure so many votes? WHY is it when I look on Wiki that I now see a very smug but refreshingly un-airbrushed mugshot of Nigel Farage in the top three? 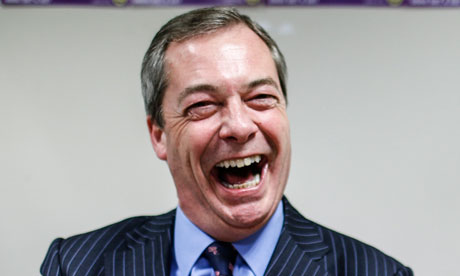 This chap seems very much NOT bored!

YES! I said boredom. Traditional Labour voters are defecting from the party, citing Labour’s loss of grip on what true socialism is and the party’s apparent lack of appeal for the working class who it used to represent. Weak and indecisive leadership and an ever increasing lurch to the right seems to be popular reasons for abandonment too. Liberal Democrat voters feel lied to. Tuition fees, nuff said. Conservatives have just about managed to do a bit of fixing to our economy all while pissing off the vast majority of the country.  Clearly we haven’t got a sudden influx of nutcases and loonies in our country. Clearly we haven’t become massively anti-immigration and eurosceptic over the past four years. What is clear is a combination of ignorance and a clear sense of voter apathy. Where 31 MILLION don’t bother turning up to vote, I think that is a clear definition of: “apathy”.

The overwhelming majority of people in this country, do not properly understand what the EU or these elections were about. I spent Thursday as a Poll Clerk for my local council. I felt more like an A- Level Politics teacher. When I wasn’t ticking names off the electoral roll, I found myself reciting the D’Hondt Method, European Parliament and pretty much everything in the book. A few voters even asked for an explanation of what each of the parties stood for!

Imagine explaining all these??!!

The surge in support to UKIP in my eyes is mainly nothing more than people not turning up to vote and the electorally great unwashed dutifully putting their ballots in and a protest vote. There seems to be an increasingly false dichotomy between the affectionately named LIBLABCONS and if you aren’t involved or even basically versed in politics then said dichotomy becomes even more false! (Give cue to: “They’re all the same!”) But if the people are choosing to vote for a party infiltrated by racists, homophobes, misogynists and all round general nasties because they are misinformed and would rather these than the top three, surely they’d equally as much vote for a bunch who are offering a much better deal? Here is where the likes of Left Unity and TUSC come in.  2013 went out with a bow and an appeal by film director, Ken Loach to set up a: “New party for the left”. As a result we now have Left Unity! 6 months alive and kicking and with 19,000 members, the party achieved a sweet average  of 4.1% of the vote amongst it’s local councillor candidates stood in Wigan, with one candidate-  Hazel Duffy snatching 252 votes (8.8%) in Wigan West ward.  In a similar vein, Trade Unionist and Socialist Coalition (TUSC)

Personally although the rise of the populist right is a bit unsettling, I find it to be positive news in changing the political landscape. Populist right will pose us more of a challenge and more of a favour on the left than a threat. With Labour in fear of a split vote, the leadership may be kicked into prime shape in time for the election. After all Ed hasn’t done it for the past four years, the next 13 or so months is his last ditch saloon as it were. This also acts as a signal mechanism, signalling to the parties across the spectrum that people are bored and are looking elsewhere… places they probably wouldn’t have thought to look before.

The likes of Left Unity and TUSC stand to make a somewhat small but considerable gain from this fallout if they focus efforts carefully on trying to appeal to the general electorate. Left Unity and TUSC are still quite new (particularly LU) and one finds it hard to look past the fact that LU seems quite ideological in it’s approach. As opposed to offering electoral pledges and solutions, the party seems very narrow in approach with “Policy” pages speaking more of what they call for as opposed to what they WOULD DO if elected. I cannot help but think it all reads like a document produced by the Campaign’s Officer at a student union or something.  As for TUSC who seem to run heavily on the ticket of anti-cuts but rarely, if at all seem to discuss anything else!